In the first edition of Diaspora we kind of made a hash of a great idea, tricked by successful playtests into thinking we’d written excellent rules. And for a small number of people we probably had, but not for everyone and not even for most.

I think the idea was first brought to my attention (nothing is original) in an RPG.net post in 2008 or so by Fred Hicks. I can’t find it now, but the gist was that maybe you could just use the existing zone combat rules and change the map to something notional rather that geographical and get a social combat system. Zones would be ideas or beliefs or other abstractions, but otherwise you’d leave the system intact.

This sounded like a brilliant idea. In practice it wasn’t — it led to the same problem I always had with social combat: you’re just figuratively beating each other, reducing a different kind of hit point. While the narrative is different, it’s still constrained to make sense of a combative scene, so it’s actually very limited. Like using the combat system to model acrobatics as well as gunfights. Yeah, yeah, Fate fractal, I hear you. Sorry, but endlessly and reductively using the same complex system for everything is boring. And strangely confining. It’s like saying Lego is best used for making a wide variety of giant Lego bricks with which you can make more and bigger bricks. Literally any kind of brick! Eventually you realize you haven’t got around to making anything but building materials.

Anyway, it sounded enough like a good idea that we wrote it up for Diaspora and what we published is pretty much where we stopped thinking about it. The rules give some unfortunately vague advice about what a map should look like and some contradictory rules for how to interact with the map. The thing is, our playtests with it were great. They were great, though, because we stumbled on some specific uses (that actually disobeyed many of the rules we wrote down) that were huge fun. I had actually failed to analyze what I did as a ref so I could mechanize that and instead mostly just wrote down the core idea that led us to a fun space. I had failed to give you the tools to reliably reproduce those good times. Since I hadn’t done the analysis, I didn’t even know why it worked when it worked or why it sometimes failed. Not all of the examples were every tested — they were just ideas that might or might not work.

Since then I’ve thought a lot harder about this. There are actually two different ways I’ve obeyed these rules (sort of) with good results and they are substantially different. These differences should be codified for a decent system to exist, and we might even want to just pick one.

The first is to have the protagonists and antagonists on the map. The objective is to move yourself to the Idea you want to dominate and to move your opponents to some place inert or favourable to you. Since this is the most important part of the resolution, the whole idea of beating each other’s composure hit points down should be dropped — that’s an attrition battle that distracts from the maneuver battle where we’ve invested all our energy. The map is a creative burden on the ref — what best handles the scene’s needs? But this is the biggest problem: not all maps work and there’s limited guidance as to what does work. And a lot of maps that look different are topographically identical.

The other way is to invert this and make ideas the pawns on the table and the map can be people, places, cultures. The geography becomes static and we move the ideas around it. The objective is to cluster ideas where we want them but now who rolls and against who become unclear. The few I’ve run with this inversion have been great but entirely ad libbed. I have no way to tell you how to reproduce this but, as it turns out, I have no way to tell you what maps will work in either case. So we’re not further ahead. 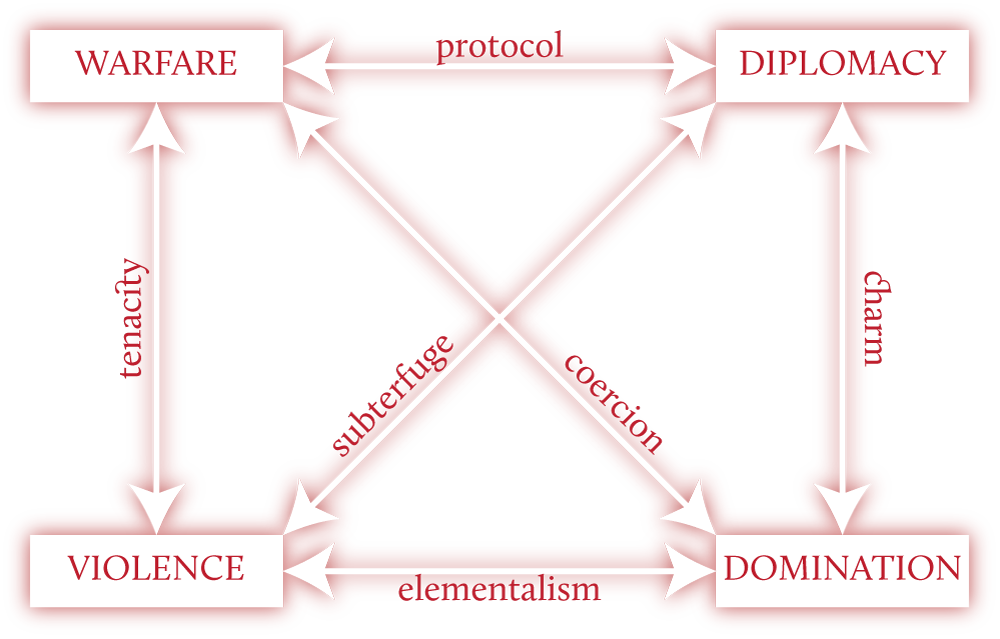 While tinkering with a very early version of Soft Horizon I started thinking about formalizing the map: let’s have one kind of map and all combat is social at this scope. How you resolve the map (where you move all the pawns to) determines just what kind of event this will be (warfare, violence, diplomacy, sorcery, and so on) and this has largely narrative impact: you make the final roll in the determined resolution space and if it’s WARFARE then you narrate your success or failure as a war. That is, the whole minigame is in the preparatory moves for the conflict and one roll resolves the conflict. This never got tested but I think it’s a step in the right direction: develop a single, generalized social combat map. I still think is possible. I still haven’t done it.

It did get me thinking about a single abstract map for combat, though: surely if it was possible to generalize social combat to use a single map, then maybe you could do the same for combat! This is of course the same trap as thinking you can use a hit points combat system and relabel everything to make a decent social combat system. But I still think it might work, especially for mass combat which seems to demand more abstraction.

Could we find a similar common abstraction for social combat? Or is this physical combat really one sub-map of many different kinds of conflict? That seems to be more the case (and I’m excited by the idea of having a vastly richer social system than violence system: one that subsumes violence as a single special case of conflict and not the most interesting). A separate system for romance, persuasion, grifting, …

Can these be enumerated? Can all of them be reduced to a model that is fundamentally about maneuver and action in the context of position? I think if the categories are general enough the answer to the first is yes — but I haven’t found the categories for this to work yet. And I’m not working all that hard on it. And I’m pretty sure that all of them can be reduced to a maneuver model, to be put on a map. Lots of maps.

But the point of this was that I am still, ten years later, flailing around trying to find good maps for this concept of social combat. So the idea that we could make a rule in Diaspora that basically said “first, invent a good map” was absurd. That’s why that section fails: we told you to take on the part that needs all the thought, all the testing, and was most likely to fail. And told you to do it on the fly.

Sorry about that, that was bullshit.

7 thoughts on “social combat in diaspora”