I think I was about 13 when I realized I wasn’t going to live to see 20.
I recall a vague terror of nuclear war before that and I recall thinking about fallout shelters and what to do if those sirens went off, but it was at the age of 13 when I sat far from home in the house of a friend of my social studies teacher playing D&D with the two of them (playing with adults! I was pretty fucking proud of that) and the air raid sirens did go off.

It was a test, of course, or a mistake. There was no warning that reached me.

I nearly pissed myself. Before that I had thought about post-apocalyptic gaming and toyed with “what would you do” scenarios but after that everything changed. Because I instantly realized that all my super-heroic ideas of post apocalyptic survival were entirely and perfectly bullshit.

What went through my mind when that siren went off was first, will I be close enough to just die outright? I sure hoped so.

Then, if not, where will I go? Who will I connect with to deal with the next days? For sure Mark and his pal here would do but I was already evaluating them and was pretty sure they were not going to be survival heroes. Nor, and I was increasingly becoming aware that this would be more important, did I feel that they were the kernels of a functioning post-apocalyptic community. Maybe Mark.

For many years after that, at least until I reached the surprising age of 21, I waited again for that siren. I heard it when it wasn’t there, heard it in the wind, heard it in the traffic. For at least eight years I was on tenter hooks waiting for that siren to indicate my life was over and the best I could hope for was to be at ground zero. Second best would be to be with people. Lots of good people.

During those eight years my gaming completely changed. D&D was phased out in favour of Traveller and then Twilight:2000. Throughout we mashed up every game system we contacted to do one of two things: either we played in an immediately post-apocalyptic world (which is to say that the session started with the sirens) or we played in a desperately stupid comic world of my own based on Jim Stenstrum’s Asskickers of the Fantastic comics. My responses in leisure were either preparation or escape.

My post apocalyptic gaming evolved from out-of-the-box Twilight:2000 to something other in very short order. The first games were war-porn survival tales during which I learned a startling amount about weapons. Enough that years later when I first fired a pistol and then an auto-loading rifle, I didn’t require any instruction. That’s pretty creepy, I think. I can still field strip a Walther P-38 I bet. But then they began to focus on us. On modeling us and what we would do and how we would do. I recall many wonderful (though short) games that involved establishing island communities. Creating sustainable locations. Thinking about logistics as well as defense. And above all, eventually, thinking a lot about people helping people get by.

When I thought I was going to die my “politics” were of a punk anarchist. When I realised I wasn’t (and started reading politics in college) I would have to align myself with socialism or even further left. Societies that protect themselves earnestly, practically, and down to individual needs were the only societies I wanted to explore.

But the other side of my gaming is harder to understand. Given that I was basically in a state of terror 24/7 we have to imagine almost anything I did was poisoned by that terror, so what do we make of the Asskickers of the Fantastic?

These were almost entirely ad libbed (and maybe the debut of my ad libbing successes). They all started with one image.

The Werewolves of BC Place started after a Michael Jackson concert. The team of Asskickers (kind of Ghostbusters crossed with the A Team) are contacted by venue management and show up at their office in the stadium. It’s a big office and it’s filled with body bags. He wants to talk about what happened at the concert and how it can be cleaned up — and kept quiet. Hijinks ensue.

The Shadow Over Ambleside begins with the shoe department at Woodward’s contacting our heroes because some of the shoes are being replaced with footwear clearly designed for no human foot. Antics (and failed sanity rolls) traversed the offices of podiatrist Dr. C.T. Hulu, the beaches of Ambleside (where Paul managed to rig an autowinder and flash to the action of his M-60, allowing him to take candid photos of startled Deep Ones in time to the gunfire), and the caverns under Woodward’s itself which, had anyone chosen to map it, would reveal a portrait of Bill Vander Zalm, the right wing loonie in charge of the province at the time. 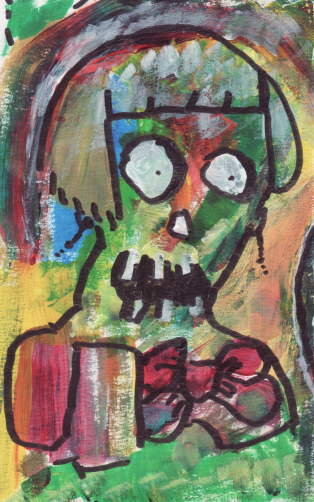 And finally, another traumatic event in my childhood surfaced as the New Coke Zombies, which were finally defeated by my friend Glen’s character, badly wounded but strapped into a motorized wheelchair armed with seltzer bottles full of 7-Up. Clearly no New Coke zombie could stand before the Un-Cola.

So essentially my gaming response to imminent doom was to oscillate between planning and panic. For eight years. Massively creative and desperate years.

It’s little wonder then that my gaming since then has become about building, about saving, and about repairing. And yet somehow still essentially, no matter how light the rules, very traditional. I really want to prod a traditional structure into becoming about these positive things rather than deeply encode these into the rules. I want players to discover that that’s what they are interested in and not just be compelled by the rules to address them, to have only those options. Partly that’s because choice really really matters, I think: to have many options open to you and then choose to repair a community is most meaningful to me. You could align yourself with the bad king. Nothing stops you. There’s no mechanical disadvantage in doing so. I trust, however, that when you develop your character and your organization and confront your first real problem, that you will choose to repair and to heal.

The King Machine is available in print from Lulu, in PDF and print from DTRPG, and in PDF only (50% off until March 2019) at itch.io.